Are you sure you have chosen the correct size?

We know that one of the biggest drawbacks when making an online purchase, is the fear of hitting the size.

For this reason, we have created a customized SIZE GUIDE SIZE GUIDE that you can find in the lower part of the tab of each product.

In this way, we are sure that we will help you improve the experience in our store.

THANK YOU FOR TRUSTING BASKET REVOLUTION! 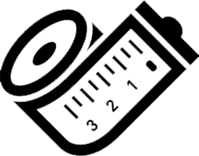 Availability: Out of stock

The Air Jordan VI marked the year MJ led the Bulls to their first Championship title. Today, the Air Jordan 6 Retro Men's Shoe pays homage to the 1991 original that captured a generation.

- Leather, synthetic or textile upper depending on the colour

- Foam midsole with visible Nike Air cushioning in the heel

Since his game-winning shot that brought the National Championship to North Carolina, Michael Jordan has been at the forefront of basketball consciousness. He took the court in 1985 wearing the original Air Jordan I, setting a new standard for performance and style, simultaneously breaking league rules and his opponents' will while capturing the imagination of fans worldwide. • Take the socks that you will normally wear with the shoes and measure your feet in the afternoon (they tend to swell throughout the day). Distribute the weight equally before measuring them.

• Stand on a firm surface with the heel against the wall at a right angle and a blank paper taped to the floor.

• Mark the outline of your foot on the paper with a pencil, ballpoint pen or marker. Repeat with the other foot, since it is possible that both feet have different measures.

• Use a ruler to measure the longest distance of your foot, called "tip to toe."

• In case the measurement of your two feet is different, we recommend you choose the longest measurement to avoid that the foot of greater length impacts against the toe.

*Note: The measurements of the column that appear in the following table "distance from the heel to the tip" (cm) will be slightly shorter than the CM measure that appears on the box or label of the shoes. It is something that we know and that we have already taken into account.

Use the following table to determine your size according to your measurements. If your measurements correspond to different suggested sizes, choose the setting that you feel most comfortable with.