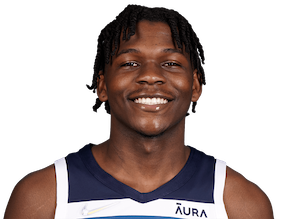 ANTHONY EDWARDS | Anthony DeVante Edwards (born August 5, 2001), is an American basketball player in the NBA. At 1.98 meters tall, he plays in the guard position. In March 2018, Edwards helped Holy Spirit Preparatory defeat The Heritage School for the Georgia Independent Schools Association (GISA) Class AAA state championship. He re-classified to the class of 2019 in November 2018 after seeing academic improvement. As a result, Edwards became the number one recruit in the Top247 ranking by recruiting the 247Sports website. In his senior season, his team finished as a finalist in the GISA AAA class up to The Heritage School, despite Edwards's 27 points.At the end of the season, he averaged 29 points, nine rebounds and two assists per game Edwards obtained the first team from USA Today All-USA and recognition from the fourth MaxPreps All-American team. Played in the McDonald's All-American Game and Jordan Brand Classic in March and April 2019, respectively.

On February 11, 2019, he pledged to play college basketball for Georgia, becoming the best recruit in the program in the modern era of recruiting. Edwards chose the Bulldogs over offers from Florida State, Kansas, Kentucky and North Carolina. Edwards was drawn to Georgia because two of his favorite players, Dwyane Wade and Victor Oladipo, had been coached in college by head coach Tom Crean.

As a freshman, he averaged 19.1 points, 5.2 rebounds and 2.8 assists per game. He was the top scorer on his team and among freshmen nationally. He was included in the second best quintet of the Southeastern Conference and chosen rookie of the year. He was voted Player of the Week four times during the season, the most in the show's history. He was also one of five finalists for the Jerry West Award, which recognizes the best collegiate guard. On March 20, 2020, Edwards was declared eligible for the 2020 NBA draft as one of the most hyped prospects in his class. He signed with an agent, giving up his remaining years of college basketball

He was chosen in the first position of the 2020 NBA Draft by the Minnesota Timberwolves. On March 18, 2021, in the victory over the Phoenix Suns, he scored 42 points, his personal record, thus registering the best scoring mark for a rookie in the Minnesota franchise. He also became the third-youngest player (19 years, 225 days) to score more than 40 points in NBA history. On May 5, against the Memphis Grizzlies, he repeated the feat by scoring 42 points, including 8 triples. At the start of the 2021-22 season, Edwards was 1.98 meters tall, having grown 5 centimeters since he was drafted at 1.93.