WE HELP YOU FIND WHAT YOU ARE LOOKING FOR 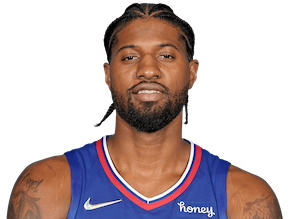 PAUL GEORGE | Paul Clifton Anthony George (Palmdale, California, May 2, 1990) is an American basketball player who plays in the Oklahoma City Thunder of the NBA. At 2.06 meters tall, he plays in the forward position.

George attended the Pete Knight Institute, where in his senior season he averaged 25 points, 12 rebounds and 3 assists per game. He was named Golden League MVP, Antelope Valley Press Player of the Year and was a member of the 2007-08 Daily News All-Area Boys team. In his junior year he had 14 points and 8 rebounds per game.

He developed his college career at Fresno State, playing two years for the Bulldogs. In his first season he averaged 14.3 points, led the team with 6.2 rebounds, 2 assists and 1.7 steals per game. He was one of the 15 highest-scoring freshmen in the NCAA and completed six double-doubles for the Bulldogs. In his second and final season at Fresno State, George was the team's leading scorer with 16.6 points, plus 7.1 rebounds, and was part of the second-best five in the Western Athletic Conference. After missing the entire 2014/15 season, it was announced on June 13, 2015 that George had relapsed in his recovery from a ruptured navicular bone. He has to undergo a second round of surgeries on his right foot, consequently missing the 2015/16 season.

George was selected by the Indiana Pacers in the tenth position of the 2010 NBA Draft making his debut in October 2010 against the San Antonio Spurs. In his first year he already earned the title in the Pacers and was included in the second best rookie quintet of the season.
On July 1, 2010, he signed his first professional contract with the Pacers, for a guaranteed two-year, $ 3.9 million contract. In 2012 he was selected for the All-Star dunk contest, although he failed to win it.
In 2013 he was chosen to participate in the All-Star in Houston, for the first time in his career. He is the second consecutive Pacer to achieve this, as Roy Hibbert did last year. At the end of that same year, on December 2, 2013, George broke his personal scoring record with 43 points against the Portland Trail Blazers.